OneWayPro® Palladium is a low-end microperforated adhesive film for digital printing with most ink types, for short-term advertising campaigns on windows.

It consists of a monomeric 140-micron PVC film with a surface coating on the front, printed in black on the back, with an acrylic removable transparent adhesive.

The perforation ratio is 70/30, enabling impeccable contrast and rendering of the printing on the front while leaving good visibility on the back.

The double OPP/Paper liner is composed of a first 33 micron OPP liner and a second 115 gr perforated siliconized paper film which allows compatibility with most machines and digital inks such as eco-solvent, mild solvent, solvent, UV and latex. 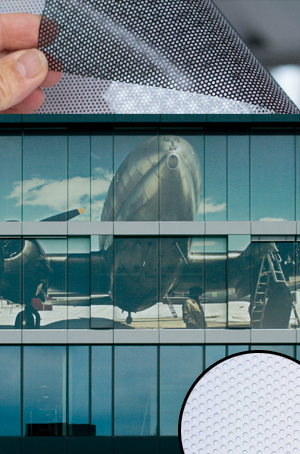